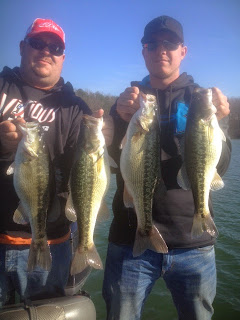 Hey Gang – Man it has been awhile since my last report. I apologize for the long delay. Up until March, business had been pretty slow due to the weather and I had only been fishing sporadically, and therefore only had limited information to report. March hit, our first big warm front came, and I have not slowed down since. I have been out on 5-6 trips a week over the past few weeks, rain, shine, or cold. It has been awesome and I am so grateful for all of my faithful customers – Thank You! Most of my business lately has been comprised of tournament anglers, so I am somewhat thin on photos, but I have shared a few recent ones above. Out of respect for those individuals with whom I have been working and their upcoming derbies, I am going to keep the specifics in this report to a minimum. I think all of you that know me understand that rather than sharing inaccurate or misleading information in any situation, I will always share truthful information, albeit sometimes brief and more general in nature, as is the case here. Now, onto the fishing portion of our broadcast…. I have been focused on the south end for the most part over the past few weeks. I have ventured up north a few times with some success, but have mainly been south of Browns Bridge. We have been hitting both creeks and main lake and found productive patterns for both. The fish are definitely behind where they should be right now due to the cold water temps. There are some good fish to be caught right now, but you have to work for them. There has been a good jerkbait bite for big fish as well. If you aren’t catching them, stay with it and change locations. My other productive baits have been a Fish Head Spin and a Shaky Head worm, and sometime a jig. Yesterday, in the rain, we enjoyed an excellent day. We hammered fish on a worm from 11 am – 4 PM. Our smallest was 2.5 and our biggest was close to 4, and we caught 15 or more in that range, with several over 3 pounds. The previous two days had been a predominant morning bite, but yesterday proved true to the conditions and the current moon phase, and they bit mid-day. We have been sacking up some good largemouth as well. We have found 3 pounders very shallow consistently over the last week. The bigger ones for us have been more in the mid-depth ranges around docks and hitting a jerkbait pretty well. That should all change with upcoming warming trend. If the 10-day forecast holds, look for the lake to bust wide open in the next couple of weeks. I am booked up for March, and only have the following dates remaining for April: 7, 11, 15, 24, 25, 28, 29, 30. My April dates have been going fast, so give me a call and let’s go get ’em! Winter is finally over. It’s time to fish. Also, Rick says Hartwell is heating up, so let me know if you would like to spend a day with the Fish Head Spin Doctor… Thanks to all and May God Bless – Jimbo