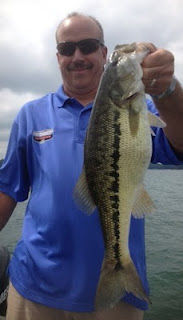 Hello Friends and Sponsors – No surprises in this report – as usual we chased the topwater and swimbait bite all week. My clients have had a ball with all the great action on top. When the wind was up in the mornings, we fished windblown rocky points and humps with a swimbait and a big spook for some big bites. If the wind calmed down through the day, we would look for areas with at least a ripple on the water to get bit. We experimented with smaller topwaters and swimbaits as the wind died down and kept our success rolling. A Gunfish as well as a Sammy were both successful when the wind laid. On Wednesday, I had out David and his father Lanier. Yes, his first name is Lanier. And rightly so. Step over Sid, Lanier is here! We had a really good day that day, including a fantastic double that David and I had over a hump – for reference his fish in the picture attached is a solid 2.75…I wish those hook-ups would have been reversed – both fish struck at the same time on casts 20 feet apart. It was awesome. We had several doubles throughout the week on the same lure, front runners, as well as two people hooking up at the same time. On Tuesday I had out Jim, who was in learning mode and a bit camera shy, so I had him snap a couple of my good ones from that day – they are pictured above right. A very fun day and I know Jim learned alot about fishing Lanier. On Thursday, I enjoyed a day with 2 gentleman from Kentucky who were here on vacation and staying on the lake. They had been coming here in past years without much success on the fishing front, so they decided to hire a guide. I was delighted to have not disappointed them! These guys had a great day with some nice doubles along with some great fish. They had a great time and are already looking forward to another trip on their return visit next year. Friday I was out with Scott. Scott had been with me before and wanted to get on some wolf-packs – and that is just what we did! We took the run and gun approach and it payed off in a very nice sack, some doubles, and of course, big fish topwater action. Thanks Scott – great day sir!! I have Tuesday this upcoming week available, and then the 28th and 29th open the following week. I also have July 5th available the first week of July, and then I have some more availability the second week of July. I have not ran a spot-tail trip yet this year given the strength of the topwater bite, but I will begin this week as I have 2 scheduled. This technique represents a great opportunity for kids as well as experienced or inexperienced anglers alike. Dropping spot tails into brush turns fishing into catching my friends. Give me a call to book your trip!! 770-542-7764 For fishing reports on other Georgia Lakes, make sure to check out: www.havefunfishing.com Thanks, and may God Bless – Jimbo