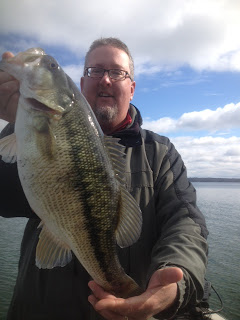 Hey Gang – I have been very busy with trips almost everyday for the last 2 weeks. Most have been tournament preparation trips for several different tournaments recently and in the near future. Took me awhile to get some pictures together that I could post! I have been running several different patterns, both North and South, shallow and deep. Lots to chose from out there right now, as you might expect with the water temp hovering around 50, and the days lengthening which prompts the big girls, both spots and LM, to start moving up. We have found some solid 2 – 3.5 lbs limit fish up North in the pockets and ditches. These fish range from 1 to 40 feet deep. Jigs, shaky heads, crankbaits, jerkbaits, and a Fish Head Spin are apt to catch these fish given the conditions on any given day. I prefer the stained water over the clear water up there, but anything is likely to produce. Down south, we have been focusing on rock points for the most part in search of the big spots starting to move up. We have caught a few monsters out there recently. Not a bunch of bites to be had, but the ones you get running this pattern are big. We have caught these fish on worms, crankbaits, jerkbaits, and the FHS. Again, just fish the conditions presented. If the wind is up, chose a moving bait. If no wind, opt for dragging something. I would like to provide more specifics but I just don’t think it fair given all the help I have given to the tournament guys – don’t want to spoil it for them. I’ll be able to provide more details in next week’s reports. The highlight for my week was the honor I had of introducing young Noah P. to tournament fishing. he is pictured above with a LM from our catch that day. Noah and his dad Steve have came out on several trips with me over the last year and have really learned alot about our beloved sport. They have came along way, and Saturday Noah and I fished Perry’s Hi-Tech Marine tournament out of Laurel Park. The weather was terrible for the most part, but we had a blast, and Noah learned the ins and outs of tournament fishing and loved it. We missed some opportunities through day so our catch was not competitive, but that was not the purpose anyway. Noah was introduced to tournament fishing and the many difference from just fun fishing. Great Job Noah – can’t wait to do it again with you!!! And a special thanks to Perry, Trent, and Brett for running a great tournament. You guys should check out this club – great bunch of guys and talented anglers to boot. Also, congrats to Kevin Stowers and his partner Perry who brought home the victory with a mixed bag of heads and spots that weighed 18 and change. Well done guys. I am booked the rest of this week, but I do have this coming Sunday open, Feb 24th and most of the weekdays next week. Sunday’s weather looks great for anyone interested in coming out. Hopefully some of the rain will go out of the forecast next week, but it still should be a great fishing week regardless of weather with the fish starting to move up. Give me a call and let’s go fish! 770-542-7764 For fishing reports on other Georgia Lakes, please check out: www.havefunfishing.com Thanks to everyone and May God Bless! Jimbo