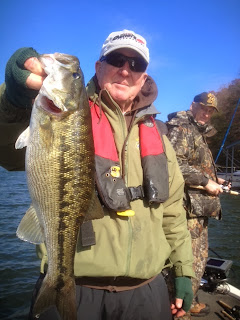 Hey Everyone – I was away last weekend and the first of this week as we departed to Indy for a wedding and an early Thanksgiving. Been on the water since returning and found that suprisingly, not much has changed in terms of the fish position. Even though the water temperature dropped 5 degrees or so, the fish and bait remain in about the same position. We are still catching fish shallow on rock for the most part. Rock is definitely the key. It can be rock in a creek, main lake, around a dock, it doesn’t seem to matter as long as there is rock. Brush or cover helps on some days, but on others the fish are just roaming on and around the rock, and are often VERY shallow. I have checked for the ditch bite and there are fish in some of the traditional locations, but they are not there in force yet, because the bait is not there in force yet. When the bait gets there, the fish will follow. The last week or so, three baits have produced the majority of our fish, including some studs: Davis Shaky Head, Chatahoochee Jig, and a Spro Little John DD. Our strategy on most days is to cover water, and lots of it. No need to spend much time in any one location, if they are there, they will eat quickly. As the temperatures continue to drop, I look for the ditch bite to pick up, along with the timber bite out deeper. There are some fish out deep, but our big ones are still coming shallow. Looks like we are in for a cold winter, which should be great for the deep bite. We have not had a cold winter in a few years – we are due. The good news is if you can handle the cold, the bite should be awesome. I am full for the next 8 days except I do have Tuesday open this week if you are interested in getting out on Lanier. I also have some dates open the week of December 9th (next week). Rick is available on Hartwell and the other North Georgia lakes, and Jamie is running those Hooch river trips for me as well, which is quite an experience. Float and Fly fishing is not on fire yet, but Craig can teach you the technique on Carters or even Allatoona. Call me if you want to fish, we would love to have you as our guest!! Thanks to all, and May God Bless! Jimbo