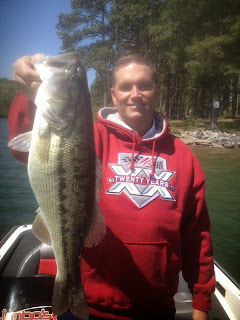 Hey Gang – The weather has been great the last few days – the warm, stable weather seems to have really helped the bite. We have been enjoying some very good days for both size and numbers. The spawn continues to progress with the warm weather. They have been coming up in waves as usual, however, I think the largest contingency of the spot spawn is yet to come. I am led to believe that based on the health of the big fish we have been catching. Most are in perfect condition – no spawning sores at all. The next month should bring the masses to the beds as the water temperature is finally right and should stay right given the extended weather forecast. Which, of course, is always accurate. LOL. As far as the number’s go, look to the “grass”/weed stalks you see growing up in pockets and creeks around the lake. You will find plentiful buck bass in those areas. We have had several 25-30 fish days running this pattern. A 1/8 Davis Shaky Head Screw Lock HBT Series and a Zoom 4” Dead Ringer in sand color has been killer on those fish. Don’t expect a bunch of big fish, but it is fun. The shallower docks that have the grass/weed cover growing around them have been good also. The docks have been giving up some good fish as well. A fluke is working well right now and that too is just a fun pattern. Watching them come up and hit the fluke is a treat. In addition, we have been fishing main lake points and humps for some big bites. A Fish Head Spin has been great on these fish which are often around the brush or shallower. When they are not as fired up, a Davis Shaky Head and worm combo has worked well to catch them. Also, don’t hesitate to drop on the fish you see on your graph with the shaky head – they will eat it. The wake bait bite has just started to materialize over the past week. We caught a few on it this morning and missed a couple of hammers. Look for that to get better as we move into May. Rick tells me the bite on Hartwell is strong also and he has been running trips up there for me and doing a great job. He has some dates open in the near future, so give me a call if you would like to fish Hartwell with Rick Steckelberg. I have had some cancellations for this week, and I currently have Wednesday, Thursday and Friday open this coming week. I also have some dates open next week and throughout May. The fish are biting, and it’s time to fish! Give me a call and let’s get out there! Thanks to everyone,and May God Bless – Jimbo