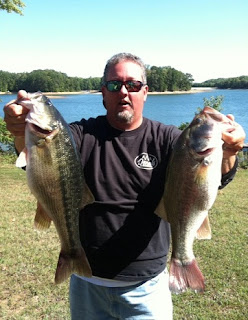 We had another very good week on Lanier – lots of topwater and swimbait action this week and some nice fish to be had.

The lake is 8.8 feet down and has a 74 degree surface temp. The fish in the lower lake are schooling well right now at the mouths of creeks as well as on the main lake. We have been focusing on these fish all week and have had some great success.

Most of the fish are on and around off-shore structure as well as rocky points throughout the lower lake. There are also many fish roaming and relating strictly to the bait – you often see these fish busting in the channel or over very deep timber as they focus on the movement of the blue backs. These fish can be caught if you are in the area and can cast to the activity. Fish are also positioning over brush and other cover and can be called up on topwater and swimbaits. We have also had good success on a FHS as well as a jerkbait.

I have included a picture of a couple of toads from the tournament today. We had a good turnout with around 25 boats and really helped a great cause. Tim from Hammond’s along with others hauled off an entire van full of toys for the Salvation Army. The cold front hurt our schooling bite for sure, but there were still some good ones to be had on top. Lots of short strikes and pull-offs today for us though, but still a bunch of fun. Thanks to all that participated.

I have Wen and Thur open next week if anyone would like to get out and get in on some of this great fall schooling action.

Thanks, and may God Bless –