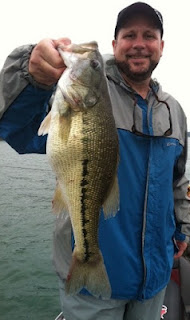 Hello Friends and Sponsors – It has been awhile since my last report, so I have some catching up to do today! I have had 9 trips over the past 6 days, including a 2 boater on Saturday. Let’s start with a wrap up of the week of May 4th. If y’all remember, I had Steve S. from Richmond, VA out with me for a few days last week. I have included one pic I did not have room for last week of him – I expect him back from VA very soon. He had a super visit and we caught some great fish. On Friday, I had a couple of tournament guys out, so no pictures of them. But, I will say that last Friday was an amazing day. We pulled up on our first stop, in the pouring rain, and I was teaching them the wake bait and how to present it appropriately. I made 2 casts trying to explain and demonstrate how to work the bait, and I had a 4 and a 3.5 on those 2 casts. The fish were on fire! They were just getting used to the wake baits so we lost some fish, but we could have easily had a 20 lbs sack on that one stop. We then caught fish the entire day long on topwater and had an absolute blast. I have included some pics of the fish I caught that day after the rain stopped, but these are far from representing the day we had – it was just awesome. Now onto Monday – Wednesday of this past week: I had one of my best customers, Johnny R, and his dad Bill out twice last week for half day trips on Monday and Wednesday. His dad came down from PA for the week and John took some time off work to make the most of his visit. I was successful in getting him to put his phone away long enough to get him catching fish – LOL! Both days were very productive and John caught some very big spots – the biggest he has ever caught I might add! We fished topwater and wakebaits over brush located on off-shore structure for the majority of our fish. I know it sounds like a broken record, but the topwater bite is just too fun, and we chase it every day this time of year. On Tuesday, I had the pleasure of taking out Brent and his buddy Kevin from AL who came over to enjoy some spotted bass fishing. We caught a good mix of spots and stripes through the day on top, and didn’t lose any of our plugs! That the first thing I think when I see one of those stripers hit is “I want my plug back”! Especially when I am using the custom-painted Daniel Truit specials! Man I hate losing those things. On Thursday, I started the day with Jimmy V – we had a blast out there that morning. This was the AM after the cold front blew in, and the topwater action was on fire that morning. We started with a wake bait, and then switched to a spook after the sun got up and we hammered some good fish. If not for a fish that got off due to a straightened split ring, we would have been knocking on the door for 20 pounds that morning… In the afternoon, I connected with Seth. We were out through the afternoon and towards the end of the day, the topwater bite got going again very strong. We caught some great fish, and missed some donkeys as well. Always fun to see them come up. The shallow brush was also our pattern in the afternoon – some good fish have been coming off the old stuff out there that you can sometimes see just under the water. Yesterday, I had Jeff out with me. He lives up in the Chestatee River, so we started around Vann’s, then headed north the rest of the day. Most of our fish came on topwater through the day over shallow brush in 18 feet or less. It seemed the further North we got, the tougher the bite got. Although, from the reports I heard from folks, perhaps we should have started up the Chestatee! Jeff had fun and learned alot – he is pictured with a nice double we had together. Phil Johnson also ran a trip for me yesterday with Kirk and his son Ellis. Phil has a boy Ellis’ age, so Phil was able to connect with him quickly and get him catching fish. They also threw topwater through the day for most of their fish. On Friday, I had a good customer out with me who’s gig is in security, so no pictures of him. However, his buddy, Roy, came down from Virginia to catch some spots, which he had never done before. He is pictured with a nice one from that day – a 4.4 spot. We caught some good fish through the day and also missed some super opportunities on some tanks, but got to see alot of action and caught several fish. We through wake baits in the morning, and the spook the rest of the afternoon for our fish. We had to run alot of piles to find ones that wanted to come up, but we stayed with it and found them! Overall, it was just a great week for us last week – lots of fun and lots of topwater action – hard to beat it. I am open Wednesday and Thursday this week, and then I have Mon-Wed (May 21, 22, &23) & open the following week. Give me a ring or drop me a note if you would like to get out! 770-542-7764 Thanks again to everyone. Best of Luck out there – it is too fun right now. For Fishing reports on other Georgia Lakes, be sure to check out www.havefunfishing.com May God Bless – Jimbo