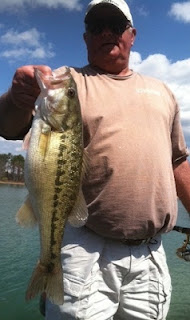 Wow. What a week on the pond this week! I have to begin by apologizing for not getting a report up here sooner. I have gotten “the business” from a bunch of you for not keeping up on my reports! I have been on trips every single day this past week with another one coming up this afternoon. So, after sleeping in a bit and spending some family time this morning, I am finally catching up on my reports!

The fishing has been fantastic. There are many different things working right now in a number of different places. You can throw a Davis Shaky head/worm combo dipped in JJ’s Magic along with a trick worm or fluke around rocky pockets/banks/docks and catch as many as you want to right now. We did that some this week and had between 30-50 fish a day doing that. However, we have found a much more active bite on the main lake and mouths of creeks with topwater, swimbaits, jerkbaits, and spinnerbaits. That was the real fun this week and this pattern definitely produced some consistently bigger fish and more action. We focused on rocky points and shoals for this pattern, as well as some rocky pockets.

There are also some early post-spawn females showing up under very shallow docks. Throw a fluke or trick worm around these shallow docks for some very nice surprises in the form of largemouth and spots.

I had a great group of clients this week, some long-time customers and some new ones along with some tournament anglers. Thanks to everyone for coming out with me – a great time was had by all! I have included some pics of this week’s action – no shots of the tournament guys but plenty of nice fish! My regular main man Johnny Pond is pictured with a double above – he also had a nice largemouth that day that did not make the photo cut – not enough space for quality photos of everything. Also of note, Scott and Jimmy from NC were out with me this week – they come down every year and we always have an excellent time together – this week was no exception – thanks guys! Lastly, a call out to Richard who is pictured above in the white shirt. Richard had never bass fished before in his life, and this guy came out with me and put it on them! He is a champion skeet shooter, and was able to translate his excellent hand-eye coordination into the use of a rod and reel quite quickly. It was a real treat to see him pick it up so quick and catch some great fish!

I have Thursday and Saturday (3/29 and 3/31) open this coming week. I am booked the first week of April, but I have Mon, April 9th and Thur, April 12th open the following week.

Call me or drop me a line if you would like to get out – it is an absolute blast out there now!

Thanks to everyone and may God Bless! Jimbo